One of the best ways to discover the most aristocratic Seville is by following the rute offered by our “the secret palaces tour”. In this tour, we will know the Pilato’s house and Lebrija Palace. They are “isolated” havens surrounded by buildings in the heart of Seville. Both palaces follow a typical structure of a Sevillian house, that is to say, Mudejar decoration mixed with surprising Roman archaeological remains, many of them coming from the Roman city of Itálica, located to the outskirts of the city.

Follow the paths of the history of Seville by following the history of this families. What better than by visiting their houses? Incredible roman mosaics on the paviments, ceramics, sculptures from the roman times the families collected along their lives. Beautiful courtyards, gorgeous architecture, and a lot of hidden secrets behind their walls.

We will begin the visit Pilato’s house. This place, also called the house of the Dukes of Medinaceli, is a mixture of renaissance style and mudejar Spanish. It is adorned with beautiful tiles and well kept gardens. It’s considered the prototype of the Andalusian palace. Its construction was initiated by Pedro Enriquez de Quiñones and his wife Catalina de Rivera, continued by his son Don Fadrique, whose pilgrimage to Jerusalem in 1519, led to the palace received the name of “House of Pilate”. It was declared a National Monument in 1931.

Finally we will know the Palace of the Countess of Lebrija. It is located on one of the busiest streets in the city of Seville, the so-called Cuna street. This palace is from the 16th century and is characterized by its precious collection of Roman mosaics, paraphernalia, columns, amphoras and sculptures of great artistic value. The place combines the Arabic style observable in its walls, the Plateresque decoration, the ceiling of the XVI century and a frieze of the Renaissance. Of course, it still presents the typical Andalusian style in its façade and design.

Meeting point: we will pick you up at your hotel, if it is in the city center. Otherwise, at the foot of the Giralda tower.

Buy it on our website !! It is safe, easy and fast. 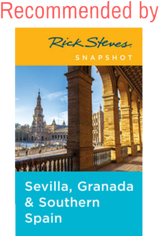